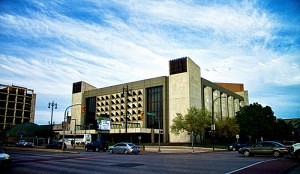 The Centennial Concert Hall of Winnipeg: 253,014 square feet of glamour, culture and architectural brilliance. After the concept was created in 1960, the project was carried out by Winnipeg architects and other international professionals until the building was complete, costing $8 million in total.

This performing arts facility seats up to a capacity of 2,305 people and is designed to expand our arts and cultural experience in Winnipeg. Attracting not only local performers and artists but also international entertainment, the Centennial Concert Hall is a monumental venue. Driving down Main Street in downtown Winnipeg, you can’t miss it: the structure is one of a kind. But it is inside the Centennial Concert Hall that the real magic happens, where, comfortable in continental-style soft seating, you can watch dance companies, musicians and more – both local and global – perform masterpieces. There are also several mural painted by Canadian artists to enjoy while you wait for the stage performance to begin.

The Centennial Concert Hall has been run by The Manitoba Centennial Centre Corporation Act since June of 2005 to ensure the smooth operation and maintenance of the facility.

Home of the Royal Winnipeg Ballet, the Manitoba Opera, the Winnipeg Symphony Orchestra and so much more

The theatre can be rented out for commercial, charitable or conference and trade show use. Holding up to 1,500 guests, the main floor is used for all kinds of events and serves as an impressive entranceway into the Centennial Concert Hall.

The second floor of the lobby, known as the Piano Nobile, is a special space designed especially as a showcase reception area. The high ceilings and spacious floor are ideal for gatherings accommodating up to 300 people and accent the music from the grand piano situated there beautifully. This part of the Centennial Concert Hall also functions as a small art gallery.

Winnipeg Symphony Orchestra is an important piece of Winnipeg …


Buying a Luxury Condo. Features to look for and enjoy.

Thinking of selling your house or condo and hiring a real estate Listing Agent? Here are the top … https://winnipeghomefinder.com/winnipeg-real-estate-blog.html/6-top-reasons-to-buy-a-condo-in-downtown-winnipeg-1867523 …

Buying A House Or Condo In 2020 – Home Buyers Guide

ABOUT US
This is Winnipeg's premiere real estate news and information site.
FOLLOW US
© All information is copyright of Bo Kauffmann, Remax Performance Realty, 2019 | website speed service for blog.winnipeghomefinder.com provided by WpFASTER!