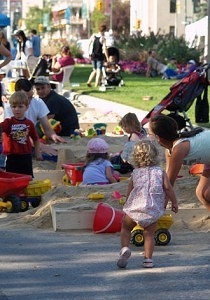 On the weekend of September 7 – 9, you won’t be able to stay away from downtown Winnipeg. A group of more than 30,000 people are expected to join in on the fun-filled weekend, participating in the many events available that are all part of Manyfest. Presented by the Downtown Winnipeg BIZ, Manyfest is celebrated on Broadway, which is closed to vehicular traffic throughout the entire weekend.

This year’s Manyfest features everything from a wine festival, a farmers’ and artisans’ market, a kids’ zone, music, entertainment, and a Giant Movie in the Park! Manyfest not only consists of many events, it also appeals to many different people: no matter your age or interest, there is something at Manyfest for all to enjoy. There’s no better way to spend a weekend in early September than appreciating the lovely weather and taking part in one of downtown Winnipeg’s most buzzed-about events of the year.

On the evening of Saturday September 8, take a stroll along Broadway and enjoy a lit procession make its way from Memorial to Main Street for the Lights on Broadway event. There will be prizes awarded to the best-lit bicycle, so be sure to bring your bike to the event to jazz it up at one of the specially designated bike decorating locations.

The following day, indulge in a leisurely bike ride! Ciclovia, an eco-friendly festival and active transportation initiative, involves displayers from local environmental and healthy lifestyle organizations, as well as a famed car-free route between Assiniboine Park and the Forks. Take to the streets between 11am and 6pm on Sunday, September 9 to enjoy the bicycle zone.

Cycling not your thing? Let loose and dance in Manyfest’s Zumbathon, or lace up your shoes to run a relay! There will also be a Big Dance on Broadway for seven hours on Saturday to join in when the mood strikes. Throughout Manyfest, you can enjoy the various booths, entertainment and ever-changing events – the perfect way to wrap up a fabulous summer.

Learn more about Lights on Broadway, Ciclovia, and other Manyfest events at www.manyfest.ca!

RSS Feed Powered by MaxBlogPress Bring My Blog Visitors Back
<

I thought you might also like....
Buying A House Or Condo In 2020 - Home Buyers Guide
Powered by Inline Related Posts

Buying A House Or Condo In 2020 – Home Buyers Guide

ABOUT US
This is Winnipeg's premiere real estate news and information site.
FOLLOW US
© All information is copyright of Bo Kauffmann, Remax Performance Realty, 2019 | website speed service for blog.winnipeghomefinder.com provided by WpFASTER!